They say you can take a person out of Sarasota, but you can’t take Sarasota out of the person. That’s how Mitchell Burchett ended up back in his hometown during two consecutive summers and one winter break interning for Jack Cox, president of Halfacre Construction Company. Just recently, the commercial construction company made it official by hiring him on as a superintendent.

“Growing up, my dad was always building or upgrading something so I was exposed to many trades early in life,” says Mitchell. “I also worked for a friend of the family doing pool cage demolitions for 2 years on the weekends and during breaks from school. From there, I worked for a plumber for 8 months before I graduated. Woodworking has always been a hobby, too, so construction seemed like a natural fit.”

Mitchell attended the University of Alabama on an academic scholarship. After originally enrolling as an engineering major, he didn’t enjoy the classwork and switched to business management. 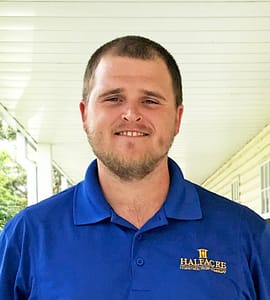 He made the decision to pursue construction because of the ever-changing environment where something new or challenging is always happening – whether it’s a change from an owner or an unexpected turn of events on site. Mitchell says it’s rewarding to see new progress every day.

As a Sarasota native, he had connections to the Suncoast. Mitchell contacted Jim Bos, owner of MBJ Group, Inc., a talent management company, who connected him to Jack. After multiple successful internships, it was an easy decision to promote Mitchell, says Jack.

“Mitchell learned a lot about the industry during his internships here and was always a hard worker,” explains Jack. “It’s easy to say you know what the job entails after dedicating yourself to the education piece, but hands-on experience is always beneficial. We’re lucky to have someone who is passionate about both. He also participated in a variety of projects during his stay here, such as the Loveland Village, Sarasota-Bradenton International Airport control tower, church remodels and school projects.”

Mitchell says his job is similar now that he’s been hired to a full-time position but has much more responsibility. His role now includes managing and overseeing the construction of buildings, addressing potential issues, coordinating subcontractors, reviewing plan changes and ensuring that they are implemented and logging daily progress. And he wouldn’t have it any other way.

If there’s any advice he could give current students in the construction field, it would be: